Does speed kill? No, it’s inappropriate speed, or speed in the wrong hands that can kill. Instead of driving by numbers we should learn to drive by context.

If pedestrians, especially children are near, let us proceed at walking pace. As a sensible trade-off, on the open road, let us, within reason, choose our own speed, again based on context and circumstances.

On busy streets, 30 or even 20 is too fast, yet speed limits license speed at that limit, absolving drivers of guilt in the event of an “accident”. Would you want to be hit by a bus doing 20mph? Six year-old Ben Alston was.

Alec Dennis, 61, pleaded guilty to driving at 52 in a 30mph limit on his way to hospital in north Devon, to take his son who had stomach pains. Dennis was worried about leaving his disabled wife, but feared his son had appendicitis (it turned out to be kidney stones). He didn’t call an ambulance because of delays in the past. Dennis got 6 points, an £85 fine and a £15 victim surcharge. The time of day the speed camera caught him committing his “crime”? 4.20 a.m. On the face of it, his conviction sounds criminally inappropriate. Story here.

Mark McArthur-Christie also rails against the pitiful nature of state policy on speed.

No-one minds reasonable regulation. What makes us see red is regulation for its own sake, or to extort revenue. As the following photos show, limits are nonsensical. Where is the spirit in all this regulation? Conspicuous by its absence. 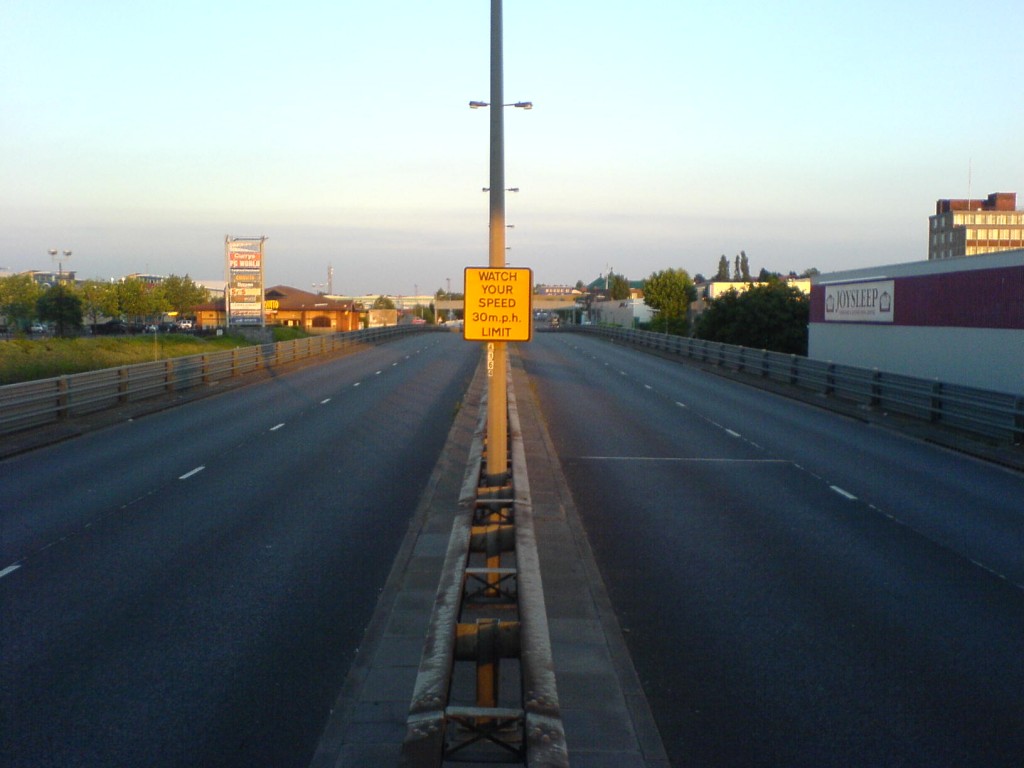 Instead of watching the speedometer and watching out for cameras, we should watch the road, surely the safest of safety principles. 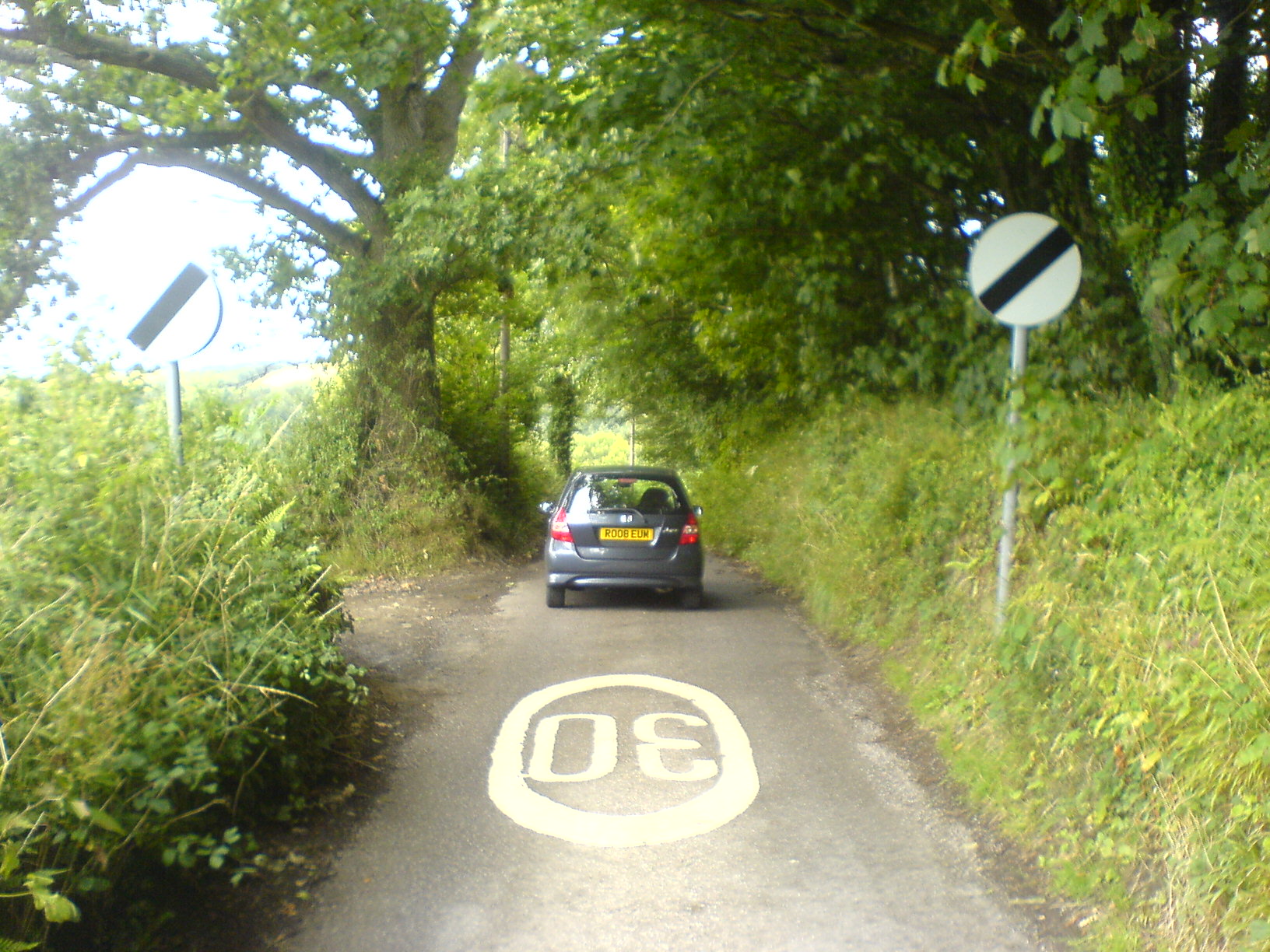 An advanced driving test should be phased in, to include hours of computer simulation, skid-pan experience, and practice based on a full appreciation of all the elements involved.

“The safest drivers are those who drive faster than average,” writes Chad Dornsife of the US Best Highway Safety Practices Institute, “yet they are the primary targets of speed enforcement. The desired safety effect of speed limits is achieved by removing them.”

No limits on motorways would bring at least one advantage: lane courtesy and an end to middle lane-blocking, which would free up at least a third of motorway capacity.

Life is about infinite variables. One-size-fits-all is a contradiction in terms. Far better to rewrite the rules, and let people act according to social context.

Whether or not Chris Huhne and Fiona Onasanya tried to pass the buck, their tales reveal the contortions to which law-abiding citizens can be driven to escape the tentacles of a system that values the letter of the law above the spirit.

For all the negative publicity about “speeding” (a fabricated crime), you’d think exceeding the limit was a major factor in “accidents”, yet the DfT blames it for only 5% of accidents. See P.7 of this document, under the heading “Injudicious actions”.

While Swindon has decommissioned its speed cameras, Oxfordshire has reactivated theirs. There’s a lively discussion about it here.

29 May 2014 – press release from Brake!
The Driver and Vehicle Standards Agency (DVSA) has clarified its written guidance for driving examiners on appropriate speed in built-up areas. The move comes in response to concerns raised by Brake, the road safety charity, alongside the GO 20 coalition, over whether driving test candidates could potentially be penalised for driving at 20mph in 30mph areas, even where the lower speed is more appropriate to the road environment.

The GO 20 coalition calls for 20mph to become the default limit in cities, towns and villages, and appeals to drivers to slow down to 20mph or below around homes, schools and shops, even where the limit is still 30mph, to protect people on foot and bike.

The DT1 document that contains the guidance has been clarified to make it clearer that the speed limit is the absolute maximum and does not mean it is safe to drive at that speed:

“The speed limit is a limit and not a target and there are many instances especially in narrow residential streets when candidates may need to reduce their speed considerably lower than the speed limit – this should not be considered as a fault.”

This reflects advice already given to examiners by the DVSA during training. All driving test candidates must demonstrate the ability to adapt their speed to prevailing road conditions, and drive at a speed that allows them to stop safely in the distance they can see to be clear.

Welcoming the change, Julie Townsend, deputy chief executive, Brake, said: “It is excellent news that the DVSA has responded to the GO 20 coalition’s concerns and clarified their guidance. There is a growing consensus that 20mph is the most appropriate top speed to protect people on foot and bike in built-up areas. It is critical that drivers learn right from the start of their driving careers that speed limits are limits, not targets, and that slowing down is one of the most important things they can do to safeguard others. This change will help give drivers the confidence to make the choice to protect people, and slow down to 20mph in communities, even in areas where the limit is still 30mph.”

My comment: at last they are talking some sense, but why has it taken so long, why haven’t they made it clear before, and why don’t they make it clear now that a limit is not a target? Why do they impose 24-hr limits, and why, if they are introducing discretion at the low end, don’t they introduce flexibility at the other end?

Most Americans have come to believe that excessive speed is a leading cause of accidents on highways and rural roads. One non-profit organization disputes this claim and says figures used in national data are inflated.

Chad Dornsife, executive director of the Best Highway Safety Practices Institute, said federal statistics claim that speed is a factor in 30-50 percent of accidents. However, the real number, he said, is actually 1-2 percent.

“When you look at accidents related to speed only, like exceeding the speed limit, the number is virtually nil,” Dornsife said.

The number one cause of accidents on highways, he said, is medical problems such as a person who is sleep deficient or a diabetic who goes into low blood-sugar shock.

Another frequent cause of accidents is animals entering the roadway, he said.

Most accidents are at convergence points where traffic is entering or exiting the main road when vehicles are usually slowing down.

“Speed enforcement, ever since the 55 miles per hour speed limits were posted, has been a primary revenue source. When speed limits went from 55 to 65, all the groups thought accidents would spike but they didn’t. They went down,” Dornsife said.

Moving ahead, the best method of determining speed limits is actually a process used since the 1940s.

An engineering study determines the public consensus through their actions while driving, what the most reasonable speed is within their comfort zone.

“That’s the best indication of operating speed on a roadway. Some think that would be the inmates running the asylum. Well maybe they should be,” he said.

All drivers have a speed range they are comfortable with and rarely go above it, even when no speed limits are posted.

“People don’t do stupid things too often. They want to get where they are going quickly and safely. They’ll go back to their comfort zone every time. We have a comfortable operating speed and don’t appreciate change,” he said.

He gave as an example, when Montana removed speed limits on rural roads, people thought there would be rampant speeding. When motorists did tend to speed up at first when entering the state, they inevitably slow to a more manageable level and speed-related accidents there remain low.

It all began in the 1970s, Dornsife said, when local police received federal grant dollars to purchase radar guns and other speed-regulating equipment.

“They began enforcing speed limits that were artificially low and it became an industry,” he said.

This generation of law enforcement has to cover the costs of what went before and collect greater fines. For every officer, there are one or two retired at full pay so the scope of fine collection – from school bus camera regulation, cell phone use or red-light cameras – continues to increase.

He calls state-level goals of having zero fatality accidents soon a blatant money grab and an excuse to exude even more totalitarian regulations.

“They might as well be wearing a black mask that goes over their nose,” he said.

“Vision zero” programs instituted in Portland, Boston and Denver have all been huge failures, according to Dornsife, and in every one, the remedies have actually increased accidents.

“Spending $110 million to be bike friendly or on more radar guns doesn’t matter if they aren’t meeting the operating speeds of the roadway. We can make roads safe if we change the roadway environment. The whole thing is that they know better than the people. Comply or we’ll fine you to death. If the data is not working, do more fines,” he said.

Speed limit increases in Texas, such as a section of road between Austin and San Antonio with a speed limit of 85 mph, have not caused an increase in accidents. However, he said law enforcement now uses zero tolerance for speeding in these areas, even when going slightly above the posted limit is still safe.

“Numbers on a sign in Texas is not a safety value. Speeds in excess of the sign are still within a safe range depending on conditions. Five to 10 mph over is not unsafe driving, it’s a complete fraud,” he said.

Dornsife volunteers his time with the institute and does not take any money for services. He has helped people fight “the system” in court and gives talks to various groups.

“I got into this because I watched as this has become a criminal enterprise masquerading as a state safety thing,” Dornsife said.

More about the mission of the Best Highway Safety Practices Institute here.