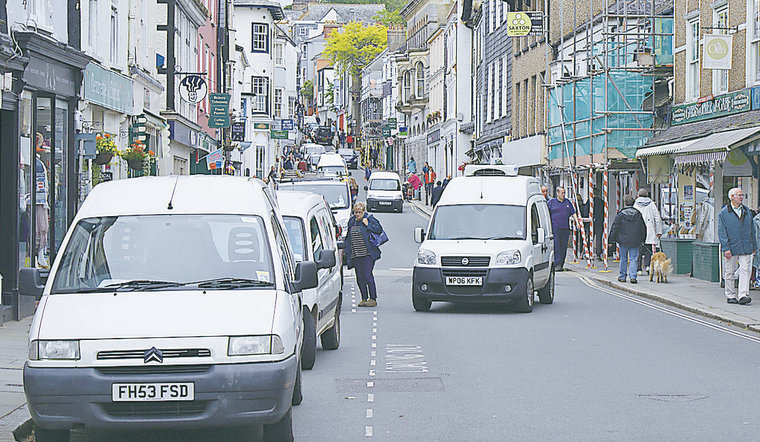 RE Open Totnes, set up to challenge the current experimental traffic order road reversal system and to explore alternative solutions to the town’s traffic concerns has held its first public traders’ meeting, attracting more than 60 traders.

A spokesman said: ‘Picture this… cars and pedestrians acting courteously exhibiting old-fashioned values of care and consideration; an enhanced streetscape with less pronounced pedestrian and motorist divisions, naturally low speeds, with planters and flowers strategically placed creating subtle cues to motorists communicating the message that this is no ‘rat-run’ but a shared journey, a shared space in every sense of the word.

‘A general atmosphere of harmony and calm springing from a sense of place and community – all roadusers fellow citizens in the same boat, or the same shared town space. Instead of traffic orders imposing regulation and enforcement, the redesigned space would produce organically low speeds, thereby reducing accidents, pedestrian and motorist stress, resulting in less congestion and a greener environment.’

Re Open Totnes says if the town becomes the home for the Equality Streets concept, that would enable this vision to flourish.

Guest speaker Martin Cassini, who was linked to the meeting via skype, gave an hour’s talk about shared space and traffic issues in general, and then took answers from the floor about Totnes .

Mr Cassini is a writer and producer who campaigns for traffic system reform. His 2008 Newsnight report, The Case against Traffic Lights, helped bring about the lights-off trial in Portishead which went permanent after journey times fell by over half with no loss of safety, despite a return from back-street rat-runs and greater numbers using the now freeflowing main route.

‘Portishead shows that self-control is over twice as efficient and at least as safe as conventional traffic control,’ said Martin.

More recently, he completed a video about the transformation of Poynton. It’s called Poynton Regenerated and is essential viewing for anyone interested in how streets designed for social interaction rather than obedience to traffic regulation not only brings peace but regeneration.

Designed by Ben Hamilton-Baillie, a leading practitioner of shared space and place-making, the Poynton scheme has been hailed by police and residents as a great success.

Through his campaign Equality Streets, Martin hopes to bring this quiet, life-enhancing revolution to towns across the UK including Totnes. Re Open Totnes said it was ‘encouraging to have someone of his calibre to show an interest not just in their campaign but in the town of Totnes itself’.

Mr Cassini had a meeting with Devon Highways in January 2009. He suggested introducing the ideas to Totnes. But he was asked to hold fire, while Devon County Council considered the matter. Nothing further happened; the county council did not pursue it. A year or two ago, out of interest, he visited Totnes. He was charmed by the heart of the town which he thought was pedestrian-friendly and worked fine.

A spokesman said: ‘There must be another progressive solution to traffic concerns rather than recycling a failed ETO from 1975 and we ask the county council to engage in this discussion as a matter of urgency.

‘The Poynton film was inspiring and shows what can be achieved on a grand scale. The group feels confident that Totnes can overcome any issues with comparatively minor, inexpensive modifications.’

The group also discussed a report by Ben Hamilton-Baillie, Totnes on the Move, which was commissioned by the county council in 2012 but shelved. It concluded that Totnes did not have a big traffic issue, and small changes could be implemented that would transform the way pedestrians and motorists viewed each other to enable them to share the town’s space more efficiently and naturally. The report used £7,000 of taxpayers’ money from the Sustainable Transport Scheme which so far has spent £250,000. The report made recommendations for the town that are proven to reduce both accidents and congestion.

The group intends to challenge why this report was not explored further and feels the experimental traffic order is premature, nonviable, and, given the increase in congestion and emissions on the perimeters of the town, feels strongly that the ETO is counterproductive. Some had witnessed vital emergency services struggling to get through the added congestion. ‘When there may be crucial seconds to save a life, how can this be permitted?’ one resident asked.

Reopen Totnes is now investigating whether air quality under the ETO is within legal limits as required by environmental law.

A spokesman said: ‘This isn’t just about trade and commerce. It’s about inclusion, equality, democracy and quality of life. Devon County Council has a duty of care.’

A decline in activity has been reported – not only by retailers. The meeting was told the Rowcroft Charity shop had seen a huge drop in stock donations, which are vital for the fundraising for their hospice care. It is causing them ‘grave concern’. The Totnes museum reported it is 40 per cent down and the community Bob the bus service is ‘adversely affected’.

Mr Cassini advised the meeting: ‘You need a dynamic councillor to stand up to officers. We can brief him or her about the action that needs to be taken to resist the reactionary onslaught of traffic officers who think they know better.

‘They are unelected, paid officials. Councillors are democratically-elected representatives. Officers cite road safety as an excuse for inaction, or for their brand of regulation. But traffic regulation does not make roads safe. It presides over a UK death and injury toll of 25,000 every year.’

He added: ‘Replace priority with equality, and watch most of your road safety and congestion problems vanish in a puff of exhaust smoke.’

Mr Cassini concluded saying: ‘We should live and let live on Equality Streets!’

He added: ‘If such an approach can work with the high mixed traffic volumes in Poynton, it can work in Totnes, with universal, lasting benefits.’

The group has decided not to carry out a ‘black your windows morning’, as reported last week.