Posted on 7th May 2013 by Martin Cassini

The UK’s leading self-publicist – the current London mayor – has appointed as his cycling “czar” someone who knows my work (he has quoted it uncredited, in at least one article). So he should know better, but not only does Andrew Gilligan support segregation between cyclists and other road-users, he promotes additional low-level traffic lights for cyclists (and for such learned advice he “earns” £38,000 for for 2 days’ work a week). I’ve often suspected an unholy alliance between policymakers and traffic control manufacturers. Is this further evidence? Article here.

Segregation misses the beauty of Equality Streets, which enables road-users to merge in a civilised mix instead of making them seethe with stress as they compete for gaps and green time. The system promoted by Gilligan is in operation at Bow roundabout: plagued by dire congestion as traffic is held for long spells at red while green shows for non-existent cyclists (see inadequate photo). Great for air quality, fuel use and heart rates (not)! 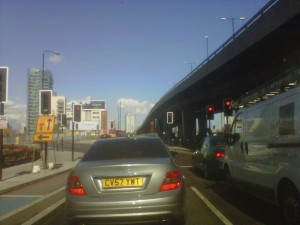 As this earlier, uncritical Standard article states, the number of cyclists killed or hurt on London’s roads went up last year. “It’s difficult to know why,” says Gilligan, “though we do know it’s largely a result of bad junctions and contact with heavy lorries.” Along with TfL chief, Peter Hendy, Gilligan wants stiffer penalties for motorists who kill cyclists.

The roads (mis)managed by these overpaid public sector buffoons are designed for danger and inequality. As usual, they see only symptoms, never causes. As long as they fail to treat the underlying cause of our problems on the road, untold harm and injustice will continue to characterise their regimes.